Well, it was not actually a castle, but a large manor house - known locally as the castle or palace because it was the largest building at the time it was built. It used to stand on Wojciech Korfantego Street, just north of Hotel Katowice and west of the Pizza Hut. near Rondo. In fact, the grounds of the house still exist in the form of a small park -Park Powstańców Śląskich (Silesian Insurgents Park) - which has the monument commemorating  the Silesian Uprisings.

This mansion was built in 1841 as the seat of the Counts of Thiele-Winckler, by Franz Von Winckler on the site of earlier court buildings. It had a ground floor, one floor and attic. 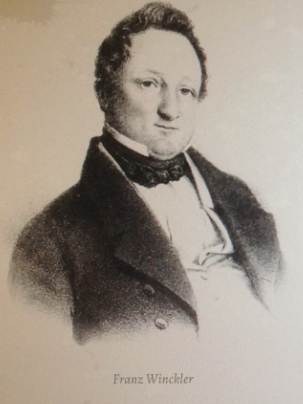 Winckler was a local mining entrepreneur, who through marriage, acquired large areas of land in the Katowice and Myslowice areas that were developed for mining and smelting purposes. The entire estate management was transferred to this manor house and Winckler appointed his school friend Friedrich Wilhelm Grundmann.

At various times Wojciech Korfantego street was known as Castle Street or Schloßstrasse - German for The Castle. (source: Wikipedia)

Although there had been plans to use the building for the Museum of the Silesian Uprisings, it was demolished by the authorities and the Secretary of the Provincial Committee of the Communist Party of Zdzislaw in December 1976.